With its boast of being Britain’s second largest festival; Peterborough has been on our radar for quite some time. So it was with high expectations myself, Jon and Brendan set off for the Wednesday session – the festival’s first full day.

This section is included in my review because I wanted to commend the festival webpage on Peterborough CAMRA’s website. All aspects of the festival information were comprehensive and clear – only GBBF comes close in terms of a comparison

Peterborough is a major railway hub and is extremely well connected and easy to get to from most places. The excellent festival webpage gave clear directions and used the location’s postcode as a google maps pinpoint so  on leaving the station we relied on a combination of google maps and following people ‘who looked extremely likely to be heading towards a beer festival’ in order to find the venue.  The walk was a steady 15 minute stroll from the station. The only thing which could make this better would be some sign posts from the station. 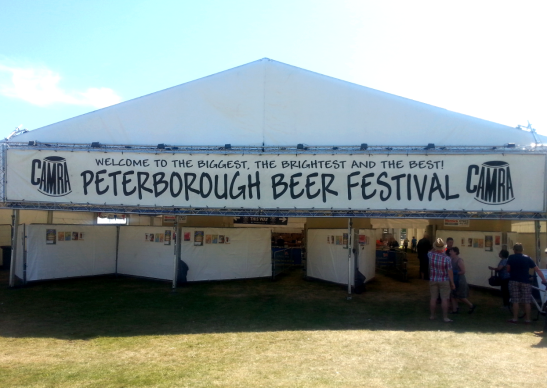 Entry was £2 before 3pm and £3 after (£1 and £2 respectively for CAMRA Members). Glass hire was £3 and you could even exchange your dirty glass at the end of your session for a clean one to take home. Programmes were free. Entry also brought us our sole grumble of the day. Bags were searched on entry and unsealed water bottles had to be emptied. Now the day we attended was one of the hottest days of the year and so wanting to be able to fully enjoy the festival we did the common sense thing and brought water with us – Brendan bringing sealed bottles was able to take his through whereas my recycled bottles had to be emptied. Fortunately they were selling water bottles at the venue for a very reasonable 50p but nonetheless this policy was disappointing. I know there are legitimate safety concerns  surrounding unsealed water but I think a common sense approach might need to be developed by CAMRA with perhaps a tap water bottle filling point to keep people hydrated and to fit with CAMRA’s attitude towards responsible drinking.

Marquees dominated the Broadland park area with two long marquees joined together by a middle section containing the stage and additional seating. If you are familiar with the GBBF the layout is very similar. The beers were divided between the two long tents (clothing, games and cold food also filled the spaces) and hot food vendors were located outside; as were toilets and fairground rides. There was plenty of space and it was cool enough inside the marquee – when compared to outside! 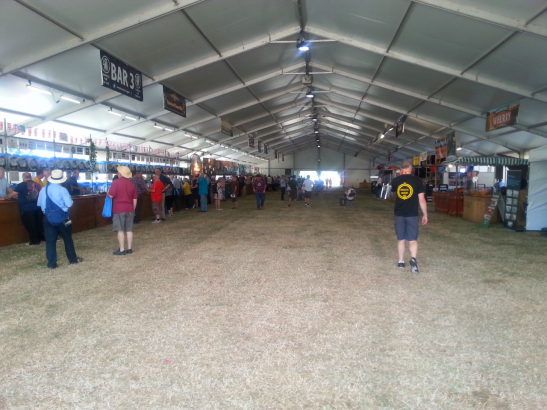 Choice was very wide and what you would expect from a big festival. Thai, Bratwurst sausages, cheese, and seafood to name a few. Brendan won top trumps regarding food on the day. Choosing a truly phenomenal burger from a farm based provider before having the foresight to see donuts and beer as a decent pairing!

Beer
The three of us unanimously agreed that this was the best beer list we had seen for any festival so far this year. There was a true wow factor about it. There was a good amount of diversity and plenty of strong ales to try! Most of which were located in one section of the bar. It undoubtedly trounced GBBF’s beer list this year.

An additional point to make is that all beer we tried was in good condition. Credit must go to the beer team who did a great job in keeping the beer cool.

A progressive move from Peterborough CAMRA was to have a KeyKeg bar: the dispense method now recognised as Real Ale by many in CAMRA. It was good to see there was a feature on KeyKeg in the programme. I enjoyed the two offerings from Cloudwater and Magic Rock I got from there. I think KeyKeg is a great idea and as long as it remains a minor sidekick to traditional cask ale at such festivals I think CAMRA should continue to support it.

To see the beers we tried, check out our Twitter Feed.

Peterborough Beer Festival was (minus the water) an excellent experience. We all came away feeling that it needs to become a permanent fixture in our beer festival calendar. If they continue to provide an excellent venue and a truly dynamic beer list then it will be one we aim to attend for many years to come.