This is our first post of 2014 and it is about Pressure Drop Brewing.  They are a very new brewery and their first beers were only sold this time last year. They are based in Hackney Central and the only information on them on their website is this.

‘We’re Graham, Sam and Ben, three blokes in a railway arch doing lots of cleaning and trying to make the tastiest beers we can’. 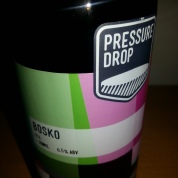 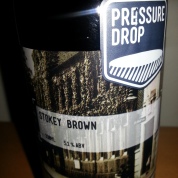 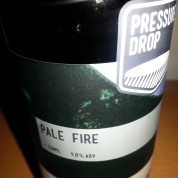 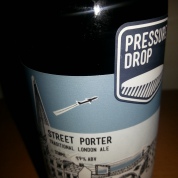 So yeah not much to go on but I personally like the intrigue. It seems they concentrate on the product first and foremost and the rest is immaterial. I have always wanted to try Pressure Drop’s beers as I wanted to prove myself wrong on something. As you can see in the gallery above all of Pressure Drop’s beers have fantastic labels. Alongside their fancy labels are some rather outlandish names for beers. Now I won’t name any names but you can probably think of a couple of examples of beers with fancy labels and bizarre names who were more interested in the aesthetics of the beer rather than what it tasted like. I would like to say that Pressure Drop is an exception to this rule. Check out my tasting notes below.

Wu Gang Chops The Tree – Foraged Herb Hefeweisse 3.8. A very cloudy wheat beer with a strong herby flavour, hints of banana and clove. Would go perfectly alongside a hotdog straight from a BBQ.

Bosko IPA 6.5 – A dark amber maltier IPA with a fruity aroma and a dry hopped flavour with a bitter aftertaste.

Stokey Brown 5.1 – A dark brown beer with the aroma of a Cadburys Fruit and Nut Bar. Hint of smoke with a strong smooth chocolaty flavour.

Pale Fire 4.8 – a light amber colour pale with a good balance of flavours. Nothing spectacular.

Freimann’s Dunkelweiss 4.8 – A dark smoky wheat beer. It is rich with a slight fizz and a sweet aftertaste.

Street Porter – Traditional London Ale 4.9%. A traditional porter with hints of coffee and liquorice and a smooth finish.

My favourite out of all of these was Freimann’s Dunkelweiss. I do love a smokey beer and this one was one of the best I have ever had.

Pressure Drop Brewery have a fantastic range of beers and I bought these from Bottle Apostle in Crouch End where they have a good selection of local beers.

This entry was posted on January 20, 2014 by Jon Stone in Beers and tagged Beers, bottled beers, East London, Hackney, London.