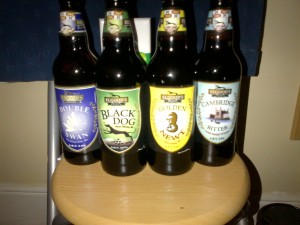 It has been some time, well over a month that this blog has laid dormant, however that is not to say we have not been out and about. We are more active on our twitter, but hope to get the blogs rolling out  again on a more frequent basis.

So we each decided to get a few bottled beers we found available from a few breweries, and thought we would do a quick review on each of these. So look out for the other blogs coming up, not just this one!

I decided I would try and get hold of any Elgoods beers that I could, as we have had these from a few beer festivals, and are quite fond of them! I could only find four of their bottled beers in the shops around Ipswich, and unfortunately the supermarket where I spotted them seem to either be out of stock of not stocking them regularly, as when I went to get some more they were gone! However according to their website they will soon have a online shop set up, where I’m sure the bottled ales will be available, and also a good time to plug one of our favourite bottled beer suppliers Beers of Europe who have the full range of current bottled Elgoods beers available here!

Now, as you well know I do tend to ramble on about the brewery as best I can, from snippets I’ve learnt from the interwebs, so if that stuff bores you, and you looking straight for the beer notes, this next paragraph you can probably skip! (Also if you do happen to read it and find that I have some fundamental mistakes, please let me know!)

Elgood’s brewery can be found in Wisbech in Cambridgeshire, and they brew out of the New Banks Brewery situated there. The site was first purchased and turned into a granary and oil mill in 1714, and it was not until 1784 that it was bought out by a Dennis Herbert and John Cooch that the oil mill was turned into a brew house. The brewery was first fully established after being purchased again by Thomas Fawcett in 1795. Over a number of years, the estate and brewery changes hands a number of times, until it is finally bought by John Elgood and George Harrison. By this time, 1877, the estate include 70 public houses, 21 of them in Wisbech (some of which still remain today!). John Elgood continued as the sole owner of the brewery, and they started their first beer in October 1878. By 1905 Elgood’s had becomes Elgood’s & Sons Ltd, with the late John Elgood first son Horace becoming chairman. In 1933, upon the death of Horace, his nephew Walter Elgood took over as Chairman and MD, this was then passed on to his son Nigel Elgood in 1968, the fourth generation in the family to be chairman of the brewery. Come 2002, Belinda Sutton, The eldest of Nigel’s three daughters takes over from him to become the first woman MD in the family! From there on there have been significant improvements to the brewery. From 2004 to the present they have been upgrading their equipment, from new Stainless Fermentation Vessels, to new racking cylinders. The brewery now has a mix of modern equipment, but still uses some traditional pieces like their mash tun still in use since 1910! Well why fix what’s not broken? The boiler (copper) is also dated and started life in 1950, and you can see why boilers are often referred to as coppers, as its made from copper! They also have large 4 acre gardens behind the brewery, that people can visit when open.

They also do brewery tours from the end of April to the End of September, which I am hoping we can also visit! As the more I read of the brewery, the more I would love to go and have a look around. So watch this space for an update on our visit to Wisbech too!

So, after you’ve survived my bombardment of dates and random facts, on to the beers from Elgood’s we have tried!

Ill first mention the beers I’ve had in the past, and then the ones I managed to find in the shops.

Black Eagle Stout 8.7% – This is definitely worth a mention. We stumbled across this at the Trafford Arm’s beer fest in February, and had to try it. It was an incredibly strong, dark, and black stout. Absolutely packed with flavour, and will knock your socks off. Definitely a beer to have in halves!

Snake slayer 4.5% – This is a beer we came across a while ago on or St Patrick day outing last year. This was a dark ale with a hint of coffee. Was a nice ale, smooth and easy to drink.

Black Dog Mild Cask 3.6% – I usually find this on tap at the Dove. This is a lovely smooth dark mild. Its a nice malt taste, with a good hop bitterness balancing it. Lovely and smooth with creamy carbonation from being pulled from the tap. One of my favourite milds.

On to the bottled beers I found!

Black Dog Mild 3.6% – This was much like the above, lovely malt flavour with well rounded hop bitterness. Pleasant aroma and body. Slightly higher carbonation from the bottle, but still a great tasting beer.

Golden Newt 4.6% – Again another lovely ale, more of a session bitter and slightly more golden. A good balance of maltiness in the body against the bitterness of the hops. Has a slight citrus aroma, and the ops jump out on the tongue.

Cambridge Bitter 3.8% – A nice refreshing bitter, again a good balance of malt and hops, a lovely golden brown in colour. Has quite a fruity body, and a lovely bitterness come through.

The beers I unfortunately couldn’t try are the other two bottled beers, Warrior, and Indian Summer. I will keep an eye out for these and hopefully get to update this with my tasting notes when I do! They also have a range of seasonal beers, so be sure to check out any beer festivals and events, and looks for an Elgood’s brew. You wont be disappointed! I have enjoyed everyone of their beers, and intend to enjoy even more, and also visit the brewery.

Just to mention, Elgood’s have a number of pubs around Cambridgeshire, you can find these conveniently listed on a map here. The closest on to ourselves is the Reindeer in Norwich, which we will definitely visit next time we are there!

So again, thanks for reading, look out for the other beers we tried shortly, and of course feel free to leave any comments on here, our facebook, or our twitter pages!

Leave a Reply to The Ale Guy Cancel reply